Rain, wind, sleat, hail, sun, more wind, more rain, more sun, WIND, WIND, more bloody wind then finally snow. That is the story of the 2nd edition of the 3 Pistes Cycle Sportive. So brutal, so epic that it scared Dougie Vipond’s plane and he got stuck in Belfast.

The long, slow line of suffering up the Lecht climb.

Over 500 of the 1100 entrants got stuck in bed. The remaining 549 stuck to the plan and rode the 103 miles, 8 categorised climbs and 40mph winds from Pitlochry to Glenshee, The Lecht and then Cairngorm. I doff my bright orange big bobble hat to you all. The rules of sportives state that there can be no winner. Ball cocks!!! all 549 of you are winners.

Thank you for riding, thank you for creating a legendary day that people will talk about for years to come.

Most of all though, a massive thank you to the team of marshals and drivers, many of whom worked until 10pm on Saturday then 5.30am Sunday morning straight through to 11pm. Without them 3 Pistes would not happen in a safe or efficient manner.

Our first finisher of the day was Alan Dobbie from Edinburgh.

Alan Dobbie was so fast he got to each feeding station only minutes after the set up team. He missed the soreen, the pretzels and the pastries. But he got a beer at the end.

Our final finisher before we had to dismantle the timing was Kenny McFarlane.

Best weather of the day was reserved for Lantern Rouge Kenny McFarlane at almost 7.00pm. He was so gubbed he fell off his bike just before the Ciste switchback and buckled his rear wheel. A bit of jiggling and a big push from the broom boys and he made it to the top.

A couple of others arrived after him. One or 2 had assistance up the Lecht in the Broom Wagon. A few others were passed by the BW and told if they wanted to complete it was under their own steam and no further assistance would be provided.

Most of you will already have you Garmin or Strava times. Below are the provisional official times.

About 30 of you are missing Hill Climb times. Sadly because the ride took much longer the battery died on the Hayfield’s box and it needed renewed.

The BBC had 8 camera teams on the route yesterday. BBC Adventure Show will be broadcast in the Autumn and BBC The Mountain in winter. General entry for 2016 will happen the week of Adventure show broadcast.

WHO WANTS TO DO IT AGAIN??? 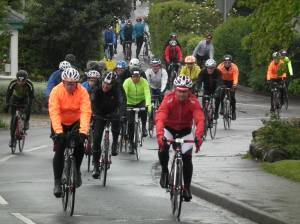 The first group of riders at Moulin, 500m from the start.

The date for the 3rd running of the 3 Pistes Cycle Sportive is Sunday 29th May 2016. It’s an English Bank Holiday weekend, so expect lots of southerners to make the trip up north.

Priority entry for this year’s riders will open tomorrow. It will be limited to 200 places at 2015 standard entry price. Riders will receive an email tomorrow early evening with the details of how to enter. Entry will open at 9pm

Last year the 3 Pistes team loved reading your ride reports. Post yours on our Facebook page and you can win free entry for 2 riders and two nights accommodation for two at the Atholl Palace Hotel. Entry closes at 8pm tomorrow (Tues 2nd June).

The 3 Pistes team other sportive is the Dunoon Full Moon ride an Saturday 4th July.

It’s an overnight bike party from Glasgow to Dunoon where we will enjoy a sunrise BBQ. Afterwards you can cruise back up the River Clyde to Glasgow with us.

Once again well done to everyone who rode the 3 Pistes. 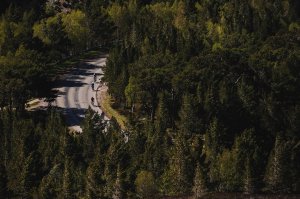 Amazing image of Sugar Bowl and riders courtesy of Jay Golian of http://www.elementalphoto.co.uk