Hello from the Adelaide Fringe Festival, where this week 3 Pistes Cycle organiser Alan is bizarrely the fastest rider going UP the Adelaide Hills. The reason, Aussie cyclists are having a well earned recovery week after thousands of them completed the SKODY 3 Peaks Challenge at the weekend – more about that later. 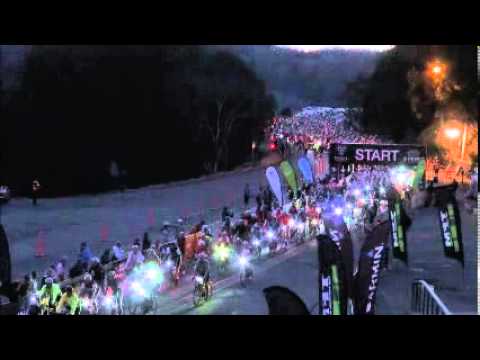 A couple of weeks back 3 Pistes team member Mark was in full research mode (at least that’s what he’s telling the tax man ;-)) as he took part in the Tour Down Under’s 154km Bupa Challenge ride – Australia’s equivalent of L’Etape Du Tour.

Aussie sportives are few in number, however they are massively supported by the local governments, who go out of their way to close roads and supply infrastructure to the events. Typical field sizes for Aussie sportives are between 5,000 -10,000. Most sportives here make it compulsory that you wear an event specific jersey. It looks great to see everyone in the same colours whizzing past you, however it makes it almost impossible to keep track of your friends as you get sucked along in the peloton. Out on club rides Pro team kit is seldom seen as everyone rides in their own club kit. The odd exception being that yucky Orica kit.

To avoid the heat, most Adelaide club rides start at 5.30 am. You can easily do an ultra flat 200km ride along the coast if the urge takes you. However, just 5km from the CBD are some of the most fun stretches of tarmac anywhere in the world to ride down, something the Tour Down Under organisers take full advantage of. Trouble is you first have to climb the best part of 600m to get to top.

Climbing up narrow ridge roads in the pitch black with nothing but the stars and your front light to illuminate your way is an eerily relaxing experience. Because you can’t look around at the view, you concentrate intently on your pedalling technique and ride position, something you frequently get to view as your shadow is regularly projected onto the side wall of the next hairpin bend by the light of whichever wheel sucker is drafting you.

Early morning routes are chosen to ensure you start descending just after sunrise. With many climbs being between 10 – 20% and 7km-10km long you have a lot of high speed riding to enjoy… and best of all you don’t have to worry about wet roads or pot holes!!!

Anyway… what about the Aussie 3 Peaks? Well if the TDU Bupa ride is L’Etape then this bad boy is the Southern Hemisphere’s answer to the Marmotte. Just like the 3 Pistes Cycle it whizzes through 3 ski resorts finishing at the top of Falls Creek. However the first 30km are downhill in the dark !!! At 235km in length and with a bucket load more climbing (4514m) it makes our 3 Pistes Cycle look flat and short.

Who wants to do this next year?

In the meantime Alan has to get more miles in before he does the 115km Velo Adelaide sportive next week.