The 3 Pistes Cycle Sportive launches in Scotland next June and promises an epic ride. Billed as the UK’s highest cycle event, the 3 Pistes ride offers a stunning – and tough – route of 102 miles through some of Scotland’s most fabulous landscapes.

The cycle challenge, from Pitlochry in Perthshire to the outdoors Highlands town of Aviemore, takes in 2,000m of climbing over three of the UK’s four highest roads. The “3 Pistes” refers to the three ski resorts that cyclists will pass, Glenshee, The Lecht and CairnGorm, where the finish line will be.

While there will obviously be a lot of ascents to cycle, the rewards will be in the fabulous scenery – and the downhills.

Alan Anderson, the race organiser, says: “Yes, there will be hills and mountains and plenty of challenges, but there will also be some fantastic downhill sections and lots of flat roads as well.”

Alan, a whisky comedian and a member of Glasgow Triathlon Club, has long felt that the A to B Highlands route would prove iconic as a cycling sportive.

He said: “The route is amazing but for many cyclists doing this on their own is tricky because they need to get from the finish back to the start. This would involve sorting out transport.

“The new sportive will solve this because we are putting on buses and vans to take people from the finish line back to the start.”

There is the option of bus transport from Aviemore to Pitlochry for the start of the event or at the end. All cyclists who finish the 102 miles before 4pm can enjoy a free ride on the funicular at CairnGorm to reach the UK’s highest restaurant. 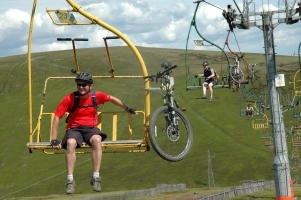